Posting this one for the weekends we choose good work (leisure can happen on week days too!) Other than my title I ‘bury the lead’ a bit in writing the beginning of this post. Hope you’ll bear with me as I get to the point” this will introduce a new MWA3P project for me, one I am calling App Smart. 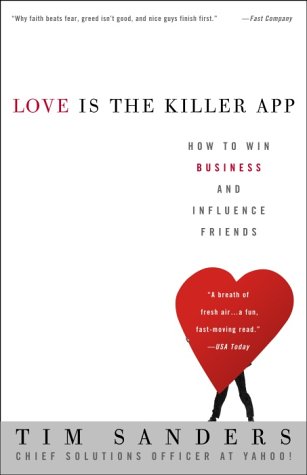 The first time I heard the phrase “killer app” was back in 2002. I was in San Diego for the Fast Company RealTime Conference (no longer held, and a conference I sorely miss). A guy on stage was explaining how we could all become ‘lovecats’ and ‘share our intangibles’ and he was very convincing: I went to the conference bookstore afterwards and bought a first edition copy of his book. He was Tim Sanders, and his book, Love is the Killer App, How to Win Business and Influence Friends is a book I still keep close, and recommend constantly for every manager’s library.

I was somewhat cloistered in corporate life back then: My employer essentially defined my world, and it had taken a lot of convincing to get my boss to approve the conference at all (he said people from New York were dangerous). I was in awe of the shift taking place on the web at the time, and had a new learner’s zeal, but I was cobbled by our passwords and firewalls at work: the newly emerging technology then was still far from my reach. Anything tech we had at home we’d bought for my kids’ homework and not for me: my son taught me more about computer hardware than my employer did — I called the IT guy for all that stuff, and yeah, he was the firewall guru / censor too. I remember being shocked at the number of laptops glowing during the RealTime conference presentations, thinking, “These people are so rude!”

I met Tim and his wife Jacqueline later that same night at a wine reception on the beach, and I asked Tim what he meant by ‘killer app’— exactly what was it?

Tim was then the Chief Solutions Officer at Yahoo! but ignorance was bliss for me: I had no embarrassment at my naivetÃ© to swallow, for I’d yet to even visit yahoo.com and hadn’t a clue. My question was sincere, but it was mostly small talk at the time, and there was so much more to be shared about the other ‘intangibles’ he was passionate about (3 of them: your knowledge, your network, and your compassion). I don’t remember Tim’s answer exactly, just that he was very patient and gracious about it.

Amazing how quickly things have changed, and how dramatically.

We’ve gone from “killer app” as simply short for ‘application’ to ubiquitous smartphone apps. Today our children know both hardware and software (remember when we needed tutorials?) and they create APIs for us!

An application programming interface (API) is an interface implemented by a software program to enable interaction with other software, similar to the way a user interface facilitates interaction between humans and computers.
— the Wikipedia definition

I love most of it.

I write this blog, publish ebooks, flickr linkin kindle tumble and tweet (interesting” to me they’re all verbs now), and I have several websites of my own. I’ve become a white-cords-only Apple Girl and mostly work “in the cloud” hiring web designers who live and work in different time zones. Friends give me links to png files as art they created for me (best.gifts.ever). I said goodbye to my IT guy when I became a small business owner working for myself, and an empty nest causes other shift… my son has gone the Android route, sticking with Windows.

Now I’m often the one on stage presenting, and open laptops no longer offend me. I can even cruise the ‘back channel’ of social media later if I want to.

Wrote this a little over a year ago:

The evidence is overwhelmingly clear to me that being more tech savvy helps you in three significant ways:

1. Tech tools CAN boost your productivity significantly when you choose the right tool for the right job, and not as a new “toy.”
2. Tech has enhanced the way we communicate, making every workplace a more mobile, and thus more nimble one.
3. Tech tools and their updates foster lifelong learning, making learning much more cool and sexy in today’s world.

So managers, don’t snub your nose at tech tools. Get with the program, and improve the quality and efficiency of your life and your work. Bring advances and progress to the workplace as a means of culture turbo-boosting.
~ The Tech Life of a Manager, 2010 and Beyond

Automatic however, may not mean Tech Savvy

One thing you’ve heard me rail about here every so often, is automatic pilot. As with habits, automatic pilot can be both good and bad. Good: How our chosen values can put our behavior on auto-pilot with value-mapping. Bad: If we’re not careful, shortcuts, old conventions and the mindlessness of mediocrity can lead us down a path where our actions aren’t synced up or value-aligned with our intentions. Automatic pilot can allow complacency to set in, and it often does.

What I’ve become more and more aware of, is how those seemingly cool and time saving APIs can deliver results that are convenient, but not fully intentional. They are sort of like an automated version of my old IT guy. He was a smart guy and good person: I admired his skills, and understood his work, but he had to get it done in a way that served him well by keeping me contained and manageable.

Well, call me the untamed beast! I wanted to learn more, understand more, and do more for myself. I wanted to decide on the wisdom of my own filters and never be censored.

This process has repeated itself in several ways over the years since. There’s a balance to achieve, and a decision to be made: Okay, now that I’ve learned more about the inner workings of this, do I still want to do it myself, use an automatic techno-whiz shortcut, or hire someone? I may get delayed on my learning curve, but at least I’ve gone far enough with my own knowledge to understand exactly what I need to apply or hire for if I call it quits. Ignorance is NOT my bliss.

Thus the weekend project I have started is this:

Once my Weekly Review is done, I’m picking one of the apps I currently use to newly qualify and re-certify it for The Fabulous Utility of my Rosa Say Productivity. One app a week, until I’ve reviewed them all, a project which also syncs up with my declaration of having 2011 be devoted to much better habits.

If you like the idea, as a potential habit to build for yourself, you can do it any day of the week. Cobbling this project onto my Weekly Review works best for me because I’m already in the best context for it — tweaking my own productivity strategically, within the mindset of strengths management (MWA Key 7).

For instance: Twitter. Truly an example of open source API nirvana for developers if there ever was one. As part of my App Smart Project I dumped @Hootsuite (sorry guys, we had a good run), only use my iPhone Twitter app for reading, sharing sightings or replying to DMs, and returned to using the web client (and only one Twitter account, retiring the others I had played around with). I got rid of most of the lists I once had on Twitter, in favor of a single private list where I narrow down my public follows to a mere handful rotated every week so I can focus on their streams better, learn from them, and better connect to their current interests and most passionate conversations. This is something an app like @formulists could do for me (supposedly), but I want to make those decisions for myself very purposefully, selecting individually and not automatically — and as a carefully crafted habit, not early-adopter testing that creates more forgotten about rubble that I will have to clean up later, again.

Now don’t get me wrong: This is not about going manual, for I love the automated wizardry which saves us from tedious effort. Back to my Twitter example, I still use a bit.ly bookmarklet in my browser for url shortening, and I’ve strung my Twitter, Tumblr and LinkedIn accounts together with APIs so they complement each other in the way I use them. But again, I’m doing it for my purposes, and I’ve intercepted the sequencing a bit: The API developer was probably thinking syndication, whereas I’m thinking sharing and aggregation.

Focus takes a lot of work! Mastering one’s productivity takes intentional diligence. But you know what? I feel better already having a plan with tackling it. Planning curates your attentions, and delivers something I much prefer: Intention.