One of the book reviews I’d like to share with you soon, will be on Haruki Murakami’s memoir, What I Talk About When I Talk About Running — and I will; not quite ready. Still sitting with it, in that afterglow a book can give when you’ve read it all the way through but keep thinking about it, and keep going back to reread certain paragraphs. 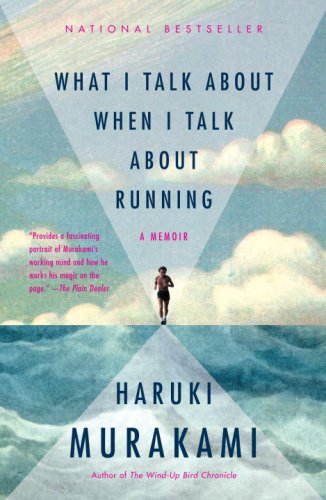 Meanwhile, here is a passage I found particularly fascinating.

If you have not heard of him, Murakami is both marathon runner and writer. He’s considered influential in postmodern literature, is probably Japan’s best-selling novelist globally, and he’s prolific, writing essays and short stories as well. He also works as a translator, and has published translations of F. Scott Fitzgerald, John Irving, Raymond Carver (who he calls “a writer beloved by me”) , Tim O’Brien, Chris van Allsburg, Truman Capote and Paul Theroux.

In his memoir, Murakami explains that he much prefers giving his speeches in English despite all the extra work, writing his speaking drafts in English too. He writes:

“Naturally, this takes a lot of time to prepare. Before I get up on stage I have to memorize a thirty- or forty-minute talk in my English. If you just read a written speech as is, the whole thing will feel lifeless to an audience. I have to choose words that are easy to pronounce so people can understand me, and remember to get the audience to laugh to put them at ease. I have to convey to those listening a sense of who I am. Even if it’s just for a short time, I have to get the audience on my side if I want them to listen to me. And in order to do that, I have to practice the speech over and over, which takes a lot of effort.”

He goes through all this, and has done so for years now, because knowing less English gives him less raw material to deal with effectively. All of Murakami’s native Japanese is just too much to sort through in constructing the sentences he’ll end up choosing. Less is easier to handle, and easier to memorize. The better you memorize a presentation, the less you ad-lib (which most professional speakers will tell you, is where they risk losing their train of thought as they speak.):

“It’s strange, but when I have to speak in front of an audience, I find it more comfortable to use my far-from-perfect English than Japanese. I think this is because when I have to speak seriously about something in Japanese I’m overcome with the feeling of being swallowed up in a sea of words. There’s an infinite number of choices for me, infinite possibilities. As a writer, Japanese and I have a tight relationship. So if I’m going to speak in front of an undefined large group of people, I grow confused and frustrated when faced by that teeming ocean of words.”

This intrigues me because of all I write in Hawaiian, even though English is my first language — my only language really, for to be accurate, I know a great deal of Hawaiian and think with the kaona (subtly hidden, storied meanings) of my life-long Hawai‘i mana‘o (beliefs and convictions rooted in sense of place), but I don’t speak it, not as language.

My speeches and presentations are all in English, of course, but I actually write them by starting with Hawaiian for the same reasons Murakami describes, with a small difference: My Hawaiian is more limited, but it is actually much more descriptive to me, especially because my thinking about it is so values-based, and my speeches essentially, are about some kind of behavioral coaching.

English frustrates me quite a bit, even after speaking it nearly exclusively all my life. There is just too much of it, and it drives me crazy how people will use different words indiscriminately. My pet peeves, as you know, are management versus leadership.

I remember how much difficulty I had in the early months of writing this blog because I used way too much Hawaiian then, and would lose people constantly. I couldn’t even understand my own challenge at first, because my ‘hapa talk,’ half English, half Hawaiian/local slang, was easily understood in my real world — my conversational, every day speaking habits are par for the course in the islands.

World-wide web publishing was a whole new ballgame, and Hawaiian is not going mainstream any time soon! I know how fortunate I am that some of my best friends today were early readers who stuck with me. I think better by thinking in writing, and so I’ve had to learn to go farther into English than I normally would have in the past — and farther than I normally want to; Hawaiian is so much more satisfying. When I start writing in Hawaiian, I start thinking within stories and concepts instead of with choosing ideas, or with writing descriptions.

So good to feel I have company in this, though we have our differences, Murakami and I!

Check out the U.S. website he has with Random House too: It’s as cool and mysterious as he is.

If this is enough to intrigue you about Murakami, and you aren’t runner or writer, I’d recommend you try reading one of his novels or short story collections first: I’ll certainly be reaching for more.

To wrap this up, here is how he finishes the passage I’ve quoted:

“Running is a great activity to do while memorizing a speech. As, almost unconsciously, I move my legs, I line the words up in order in my mind. I measure the rhythm of the sentences, the way they’ll sound. With my mind elsewhere I’m able to run for a long while, keeping up a natural speed that doesn’t tire me out. Sometimes when I’m practicing a speech in my head, I catch myself making all kinds of gestures and facial expressions, and the people passing me from the opposite direction give me a weird look.”

“Today as I was running I saw a plump Canada goose lying dead by the shore of the Charles [he writes this while in Cambridge, Massachusetts]. A dead squirrel, too, lying next to a tree. They both looked like they were fast asleep, but they were dead. Their expressions were calm, as if they’d accepted the end of life, as if they were finally liberated. Next to the boathouse by the river was a homeless man wearing layers of filthy clothes. He was pushing a shopping cart and belting out “America the Beautiful.” Whether he really meant it or was being deeply ironic, I couldn’t tell.”